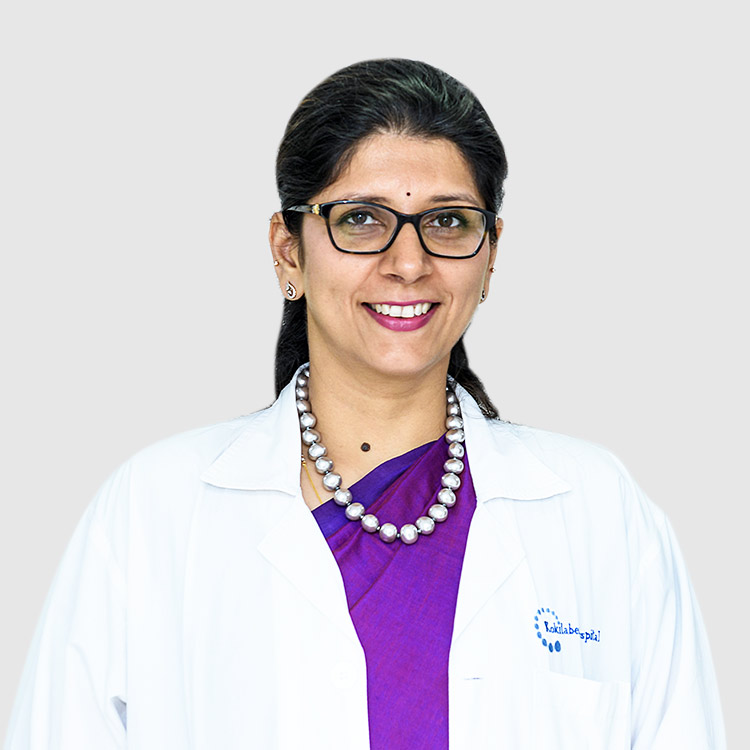 I am very fortunate that I was able to realize my aspiration to be a doctor. After my MD in gynecology from the prestigious KEM hospital I have specialized in minimal access surgery ie: laparoscopic and hysteroscopicsurgery. The advances in laparoscopy have revolutionized gynecological surgery. Advanced technology and better surgical techniques have improved outcomes for them. Hence I made a conscious decision to practice gynecology and minimal access surgery exclusively.
My endeavor is to provide the best there is in this field.

My mantra in life is to be the best wherever I am and in whatever I do. I don’t give up easily, if it can be done it will be done. The work I do and the satisfaction I get from my patients keeps me going.

Dr. AnshumalaShukla Kulkarni has done her advance training from Singapore and Australia. Previously she has worked with prestigious hospitals like Saifee Hospital, Mumbai and St. George Hospital, Sydney.

Dr Anshumala has been Consultant at KDAH since 7 years. She is also a dedicated minimal-access (Laparoscopic) and Robotic Surgeon for Gynaecology.She has performed more than 2,000 complex surgeries laparoscopically.

She has successfully removed largest uterus in Laparoscopic hysterectomy which weighed 4.1 Kg and 3.6 Kg Fibroids in Myomectomy.

She has also successfully managed and treated the largest series of Total Laproscopic Hysterectomy, Sacrocolpopexy and Prolapses with outcomes at par with international benchmarks.

A 39 year old woman from Mumbai, with no severe symptoms, was in for a rude shock when she discovered that her enlarged abdomen was not excess fat, but a result of the parasitic fibroids that were developing in her intestines. A surgery conducted by doctors Dr Anshumala gynecologist and Dr Jaydeep Palep general surgeon in Kokilaben Dhirubhai Ambani Hospital, Mumbai, helped her get rid of the pain by extracting the fibroid that weighed 5.5 kilogram. This is the largest fibroid to have been reported across the country till date.

Uterine leiomyomata also known as uterine fibroids is a common gynaecological disorder in which benign smooth muscle tumours start growing in the reproductive age group. It occurs in 20-30 % of the women older than 35 years, and the incidence is increasingly rising due to lifestyle and delayed reproductive decisions. On the other hand Parasitic or Ectopic fibroids are generally not diagnosed easily as they tend to grow outside the uterus walls. While parasitic leiomyoma can cause pain and discomfort in abdomen; they can be present without any symptoms as well, and could be detected as an incidental finding.

Dr. Anshumala Shukla, Consultant - Gynaecology Laparoscopic and Robotic Surgeon at Kokilaben Dhirubhai Ambani Hospital said, “The patient came to us with heaviness in her abdomen. We also detected a hard mass in the abdominal area, however none of the scans present with her commented about the abnormal origin of fibroids or their sizes. After careful examination the team planned for a laparoscopic removal of the fibroid and uterus, however the abnormal blood supply form intestine required an open surgery.This abnormal site of growth of fibroid maybe consequent to her previous myomectomy and some small parts of fibroid left behind may growand cause parasitic fibroids. She tolerated the surgery well and her stay in the hospital remained uneventful”.

Surgery for parasitic fibroids situated in the intestines can be difficult in case of the Bowel and Mesentery involvement and requires vigilant measures to ensure the important blood vessels are not cut during the surgery. When parasitic tumour attains a large size, it might outgrow its new blood supply and undergo further pathological changes known as degeneration. Hence it is advisable for women post 35 years of age to not ignore any symptoms and also undergo ultrasound sonographies at least once every year.

An International Patient came to Dr. Anshumala Shukla last year for repeated pregnancy losses, total no 4, at 4 months and 5 months. She had PCOD (Polycystic Ovarian Disease) and Dr. Shukla  diagnosed her as having an incompetent cervical os and proceeded to do a laparoscopic cervical interval cerclage.
Cervical cerclage is more commonly done during pregnancy when there is evidence of incompetent os, however it has its own risks and often we are unable to get  a good stitch due to insufficient length of cervix.

She did a laparoscopic cerclage by placing a tape at the isthmus through abdominal approach, placing tape correctly is crucial so it does not compromise the uterine blood supply around is tight enough to hold the os closed. Patients are then advised Caesarean section at term.

We are very pleased to annonce that the patient gave birth to a baby girl - Emmanuelle, the outcome of a relatively complex procedure but a simple solution to an incompetent os